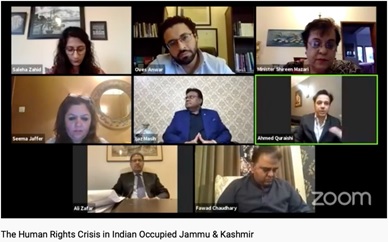 The Ministry of Human Rights organised an online seminar on Wednesday on the human rights crisis in India-held Kashmir (IHK).

The webinar was held to mark Aug 5, the day the Indian government revoked Article 370 of the Indian Constitution, stripping Jammu and Kashmir of its special status a year ago.

The ministry also showcased a film on the lives of Kashmiris in IHK to launch its Reels for Rights Digital Film Festival.

Faryad: A Wail from Kashmir explored intergenerational violence suffered by Kashmiris at the hands of Indian forces by delving into the story of a journalist speaking out for the rights of Kashmiris. The film won the Award of Merit at the 2016 Indie Film Festival and Best Film at the Los Angeles Film Fest in 2016. The film was followed by the panel discussion.

“Now that Modi’s fascism has come to light, the narrative has changed. We should move forward with active diplomacy,” she said.