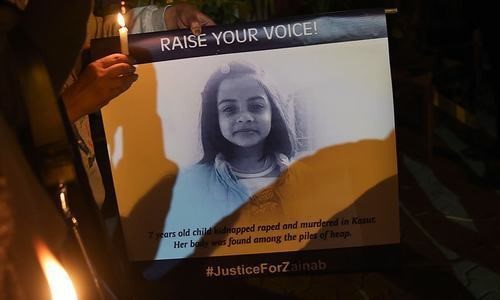 The ambit of the bill, which was earlier limited to Islamabad, has been extended to the entire country. Moreover, special courts would be established to decide cases relating to missing children in three months.

Station house officers (SHOs) would be bound to register first information reports (FIRs) immediately after receiving the complaint, failing which they would face imprisonment of up to two years or a fine of up to Rs100,000 and lose their job.

The meeting, held at a committee room of the Parliament House, was declared in camera due to sensitivity of the issue.

Tabled by Minister for Human Rights Dr Shireen Mazari it was an administrative bill for the rescue and recovery of missing children. It was named after nine-year-old Zainab Ansari, who was murdered after being raped in Kasur in 2018. The bill suggested that an authority would be established to deal with the cases of kidnapping and rape of children.

The National Assembly’s Standing Committees on Human Rights, while passing the bill, incorporated the death penalty and then it was sent to the Senate for consideration. Members of the Senate Functional Committee had suggested that the bill should have jurisdiction across the country.